Urgh. About 23:15 the aircon (such that it is) turned off and the tv turned on. And we were very confused. The sweetie said he thought there must have been some sort of power outage. A couple of minutes later the captain came on and said there'd been a problem with the power and to stay put in our cabins or wherever people were in the public areas. Eventually the aircon turned back on, and around 23:45 the captain said things should be ok now. But I was awake. And hot. I really think I'm dying. Had the blinds closed so slept through til 8:00.

Got ready and went and got some planetarium tickets, and some takeaway breakfast. 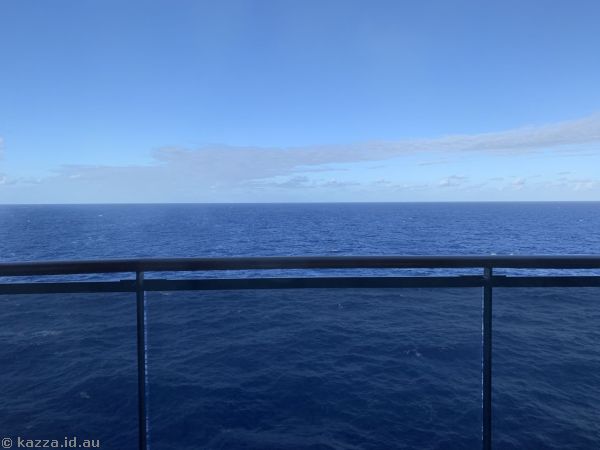 View from our room on the way back to New York

Then we (I) celebrated New Years at 9:00 and watched the Sydney fireworks on Sky News :) 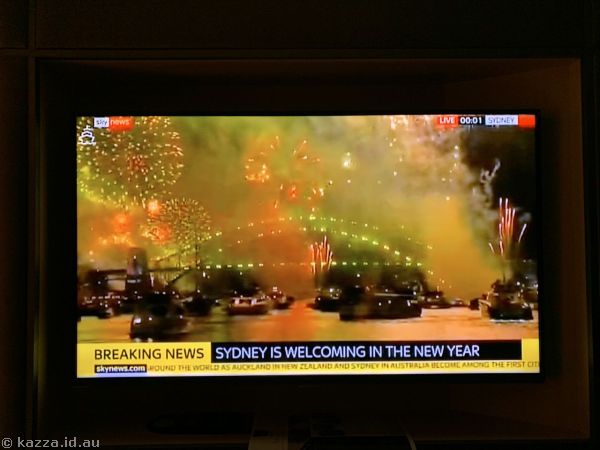 At 10:00 I went to Dr Fred Broder's next talk - How to be happy with yourself, because everyone else is taken. Again, stuff I've heard before, but always good to have it reinforced. 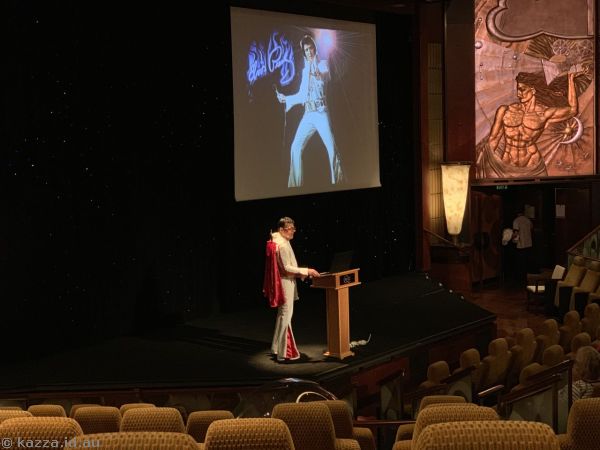 Then went to see how the jigsaws had been going for five days. There is definitely a sick bastard on board, as that art puzzle that has been going since Southampton had been partially pulled apart - the progress had actually gone backward. I HATE people. Went round the port side and Polperro had finally been packed up after being done three times, and there was another big art puzzle out, but a much nicer one. And it was nearly finished. So the dude that was there and I finished it before lunch :) 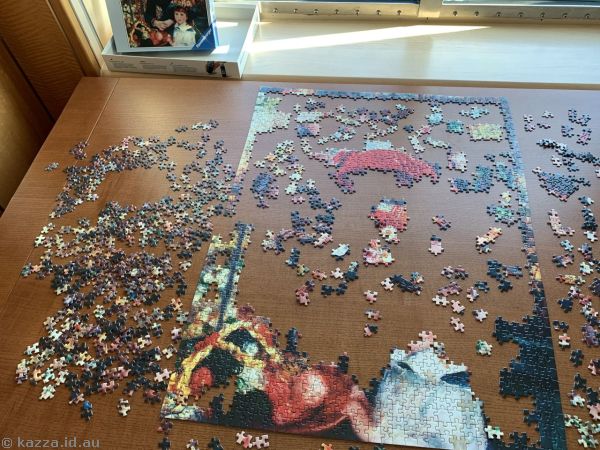 Jigsaw destroyed by some lowlife scum 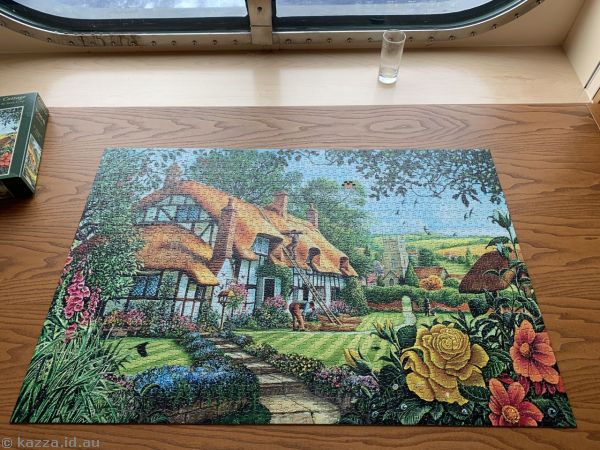 Got the sweetie and went and got some lunch.

Went for a wander around deck with the sweetie and then went to the 14:00 planetarium show. This time it wasn't actually a show, but they had an astronomer on board, Paul Fellows, who had software that could control an actual planetarium display! He had up the evening sky map as it would actually appear that evening, and went through various constellations and interesting sky features, such as Orion, Pleiades, Betelgeuse, Aldebaran, Andromeda, and some planets. Then he moved time forward to the early morning sky. Mercury, Jupiter and Venus are out in the early morning, but now we're on the wrong side of the ship to see them without getting up. Doh. Only a couple of nights left to get out and see some of the northern sky like the big dipper and north star, better get on that... 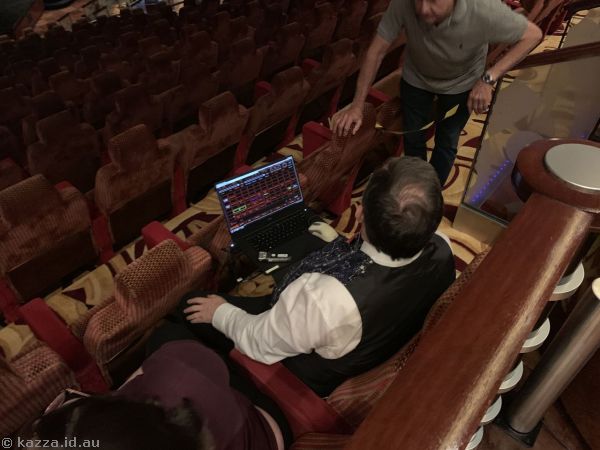 Paul Fellows with his planetarium programme 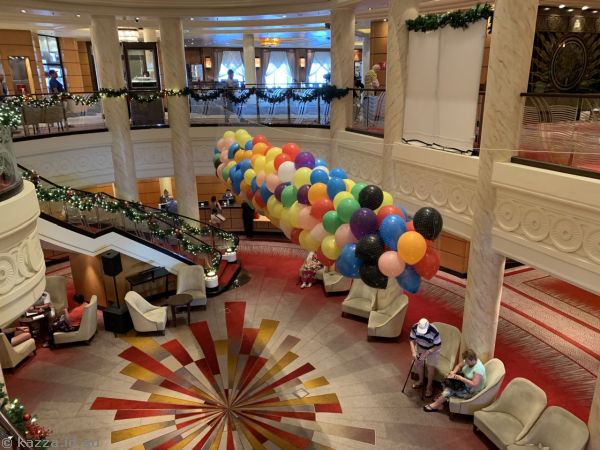 The Grand Lobby with balloons ready for New Years

Came back to the room and we chillaxed and read books etc.

Watched the sunset with glass of wine in hand. Reminded ourselves that life is good. 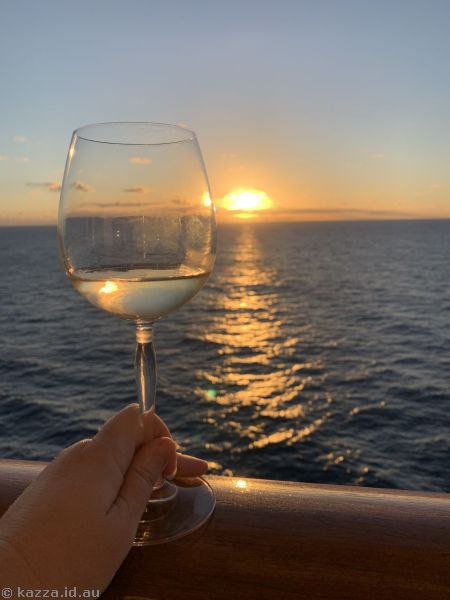 Drinking wine at sunset on our balcony 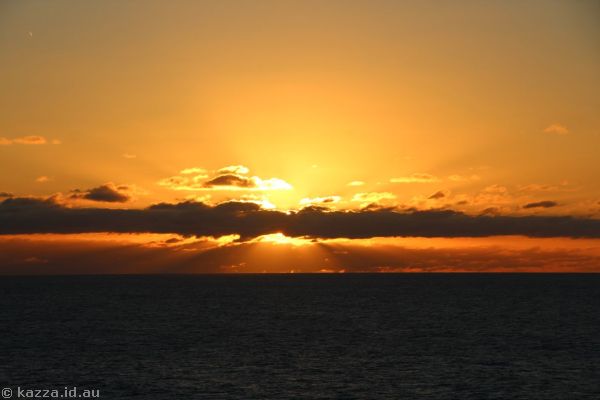 Then got ready for dinner.

Went and had a drink in the grills lounge, with the hopes that Paul and Sue would be there to take a photo of us all dressed up. But they weren't there so just got one of the staff to take a photo. 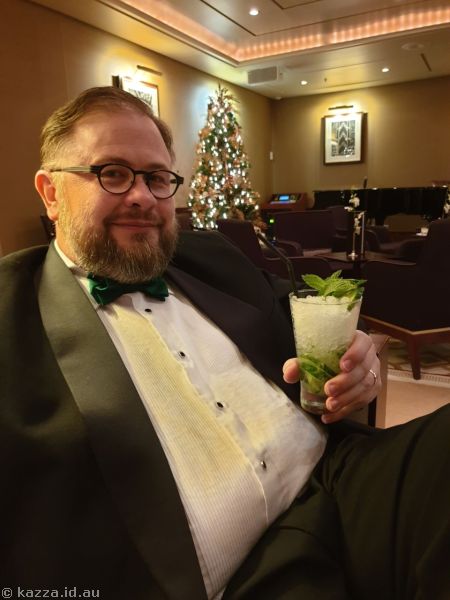 Stu in the Grills Lounge 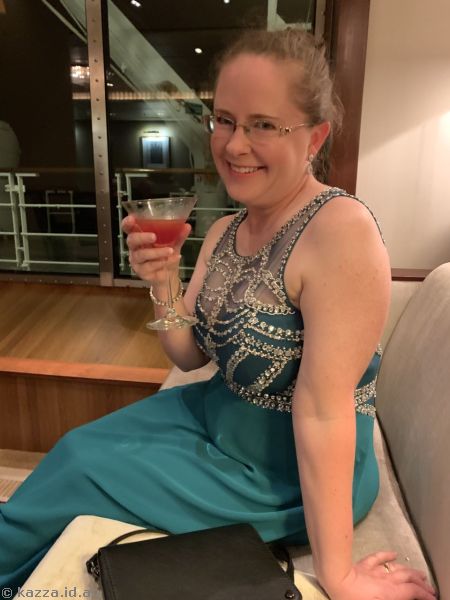 Kaz in the Grills Lounge 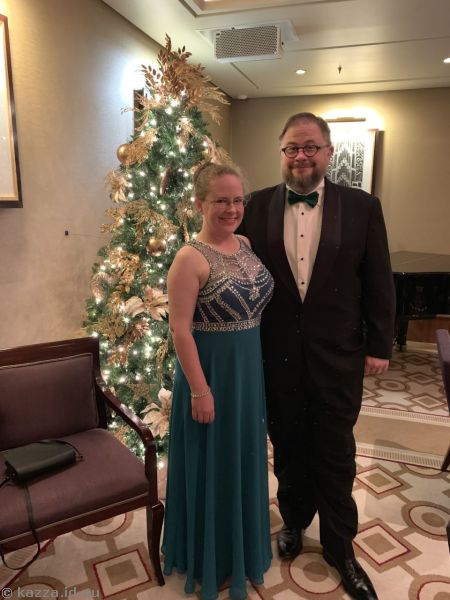 Kaz and Stu dressed for dinner in the Grills Lounge

Then to dinner. I only had two courses, but still felt full and bloated after. So didn't have the energy to party all night. The others all went off to the show. We wandered down through the Queens Room. Sure enough, professional ballroom dancers on the dance floor. Poked our head in G32 but noone was in there yet. Decided we didn't really want to wait around for an hour for the others so gave up and went to bed. Although we didn't actually go to sleep, the sweetie was channel surfing and found Goodbye Christopher Robin, which was kinda sad really. Poor kid. Heard the ships horn go off at midnight (we made it midnight after all!) then went to sleep. 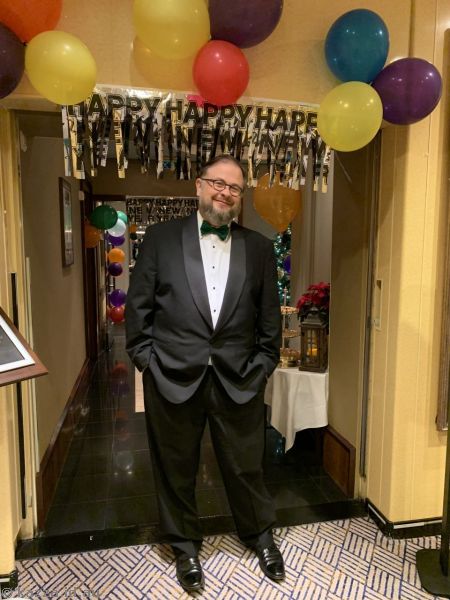 Stu at the entrance to the Princess Grill 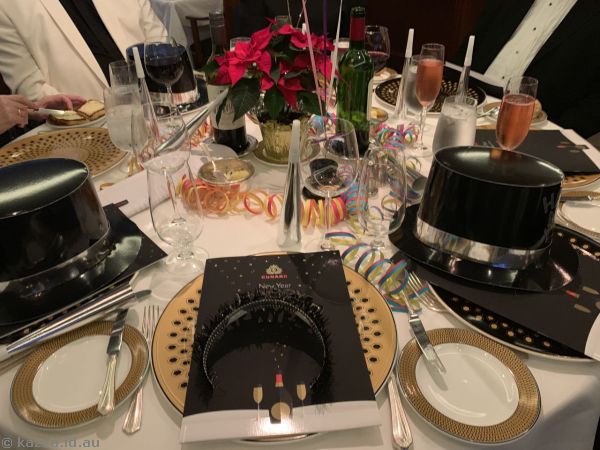 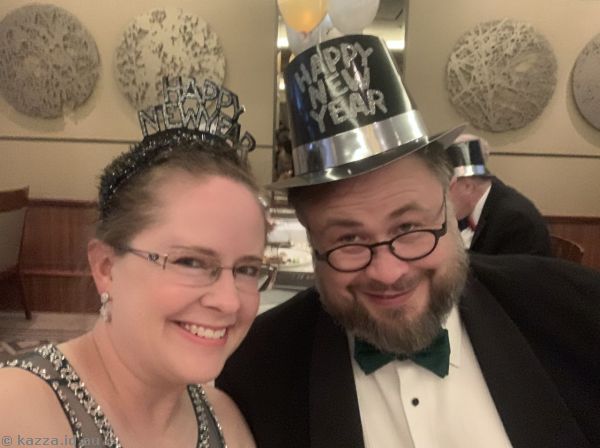 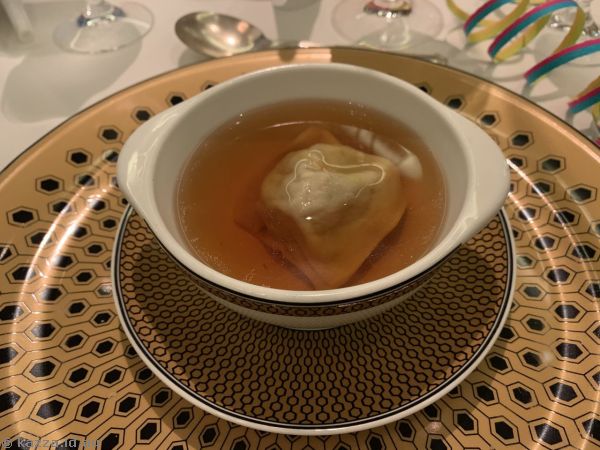 Duck consomme, duck and five spice ravioli (I think) that I had for entrée 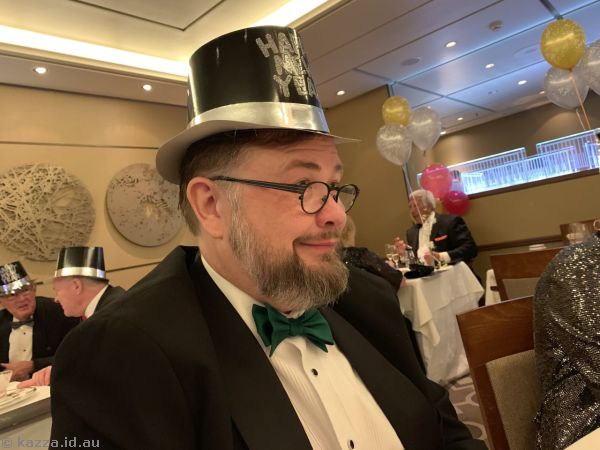 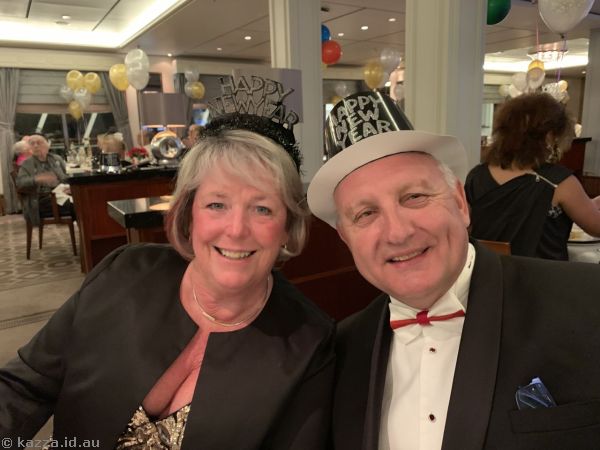 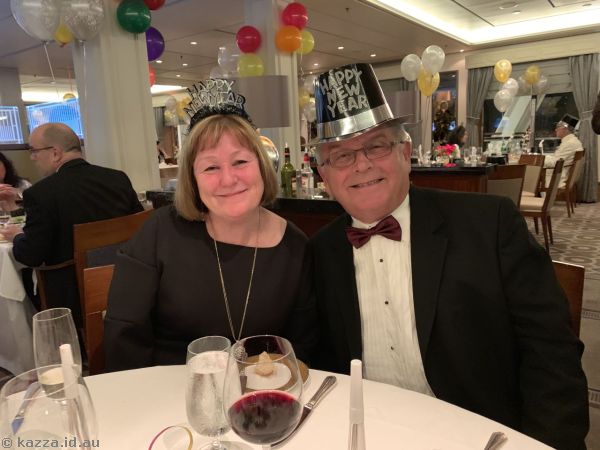 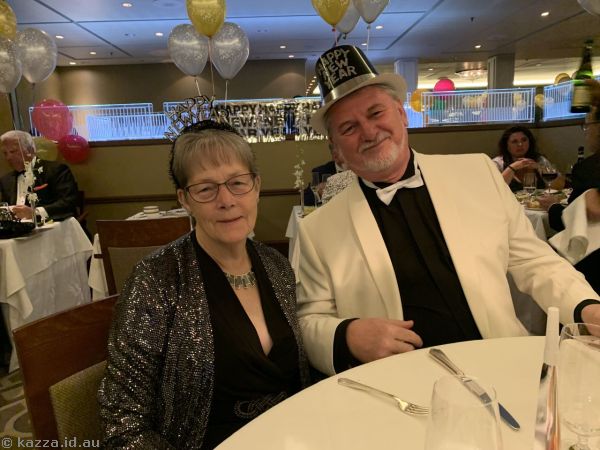 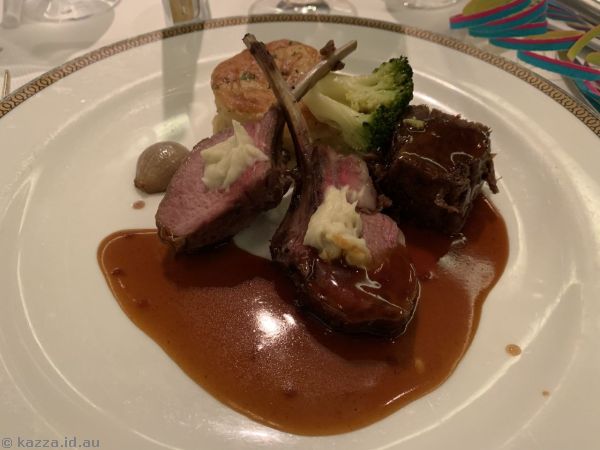 Duo of roast rack and confit of lamb, iberico ham and truffle gratin, artichoke puree, red wine and rosemary jus that I had for mains 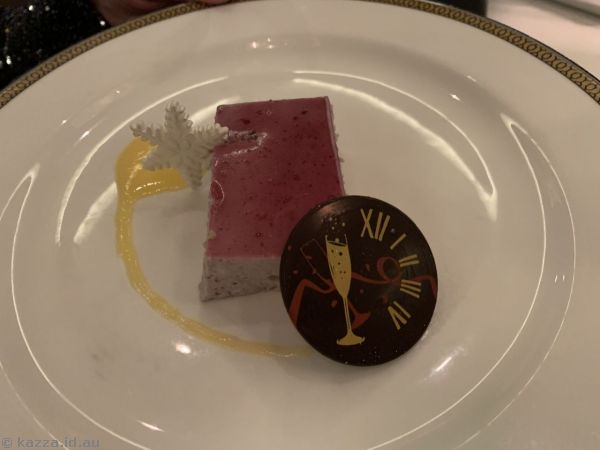 Not quite sure what this is, or even whose it was, because I don't think I had dessert that night... 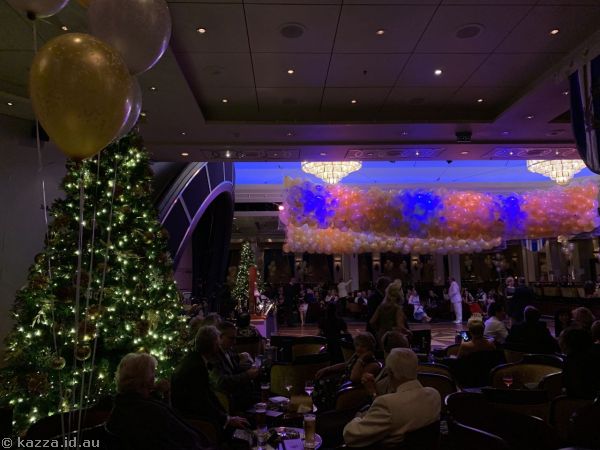 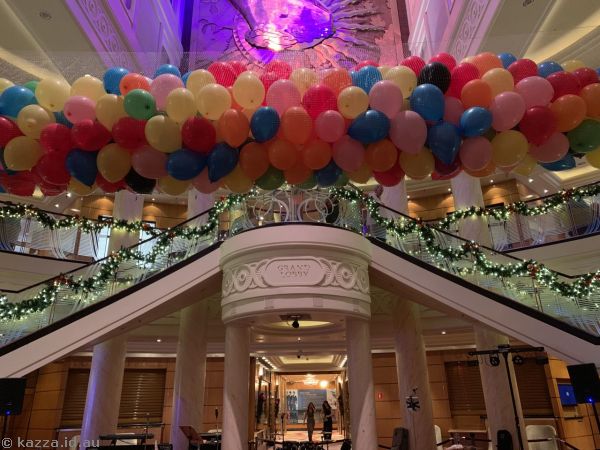 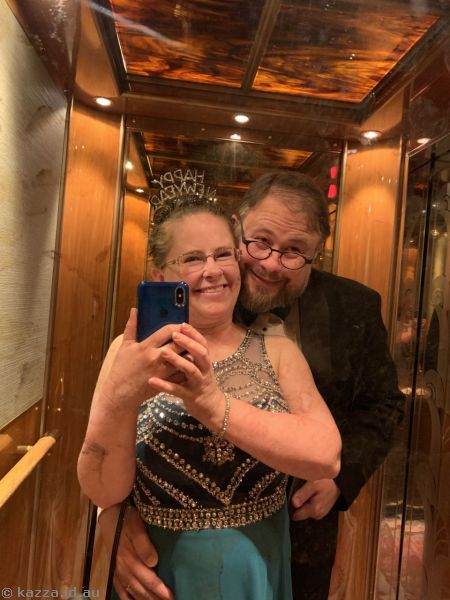